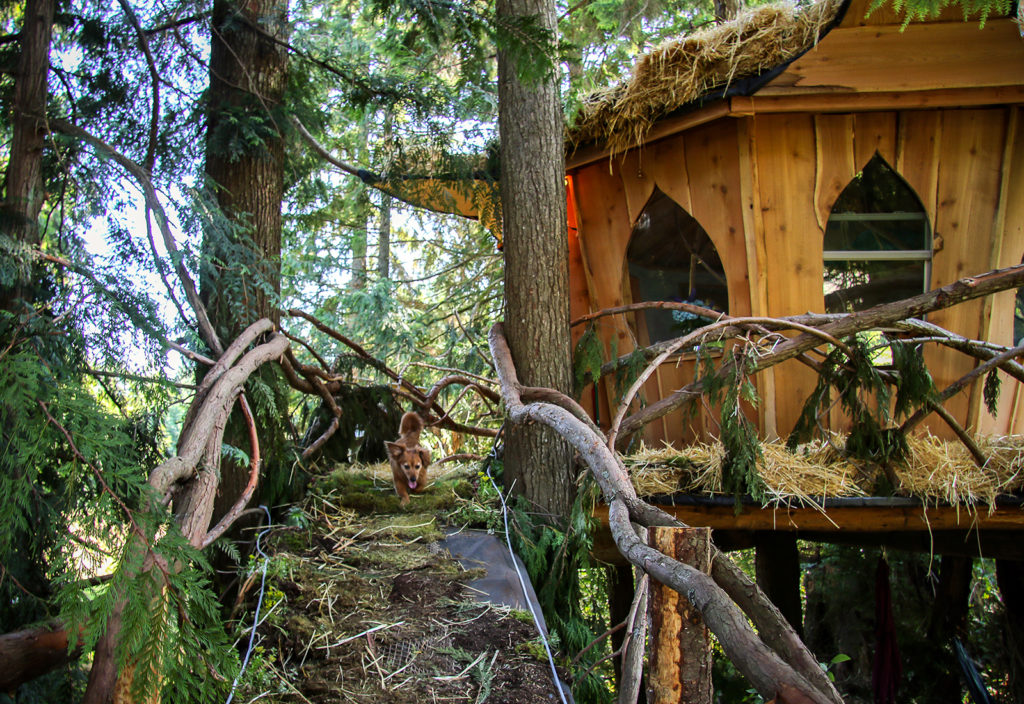 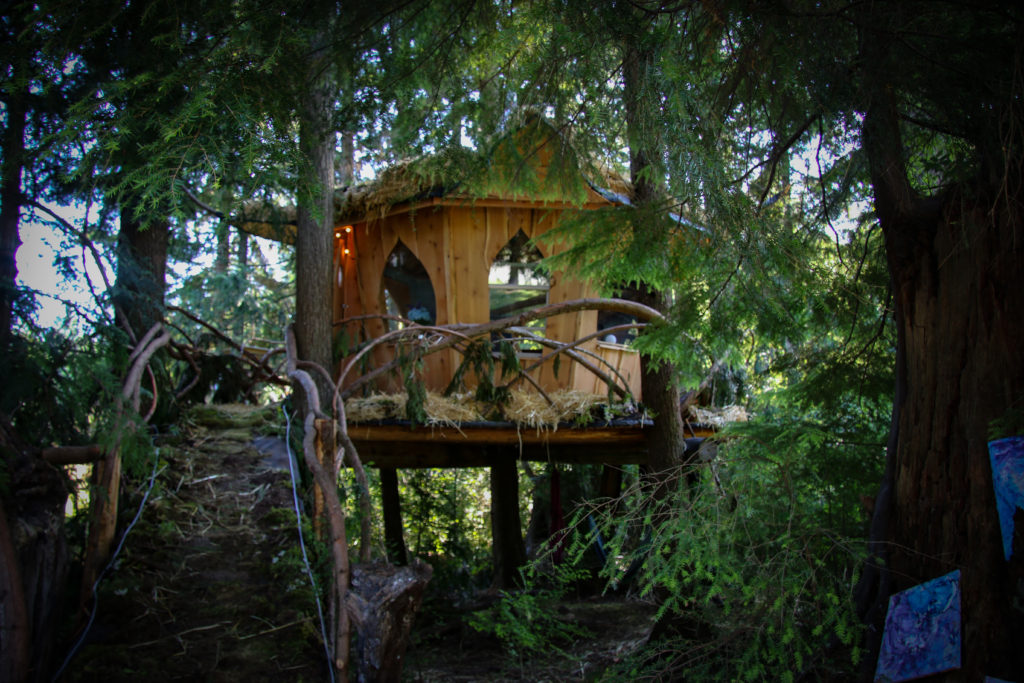 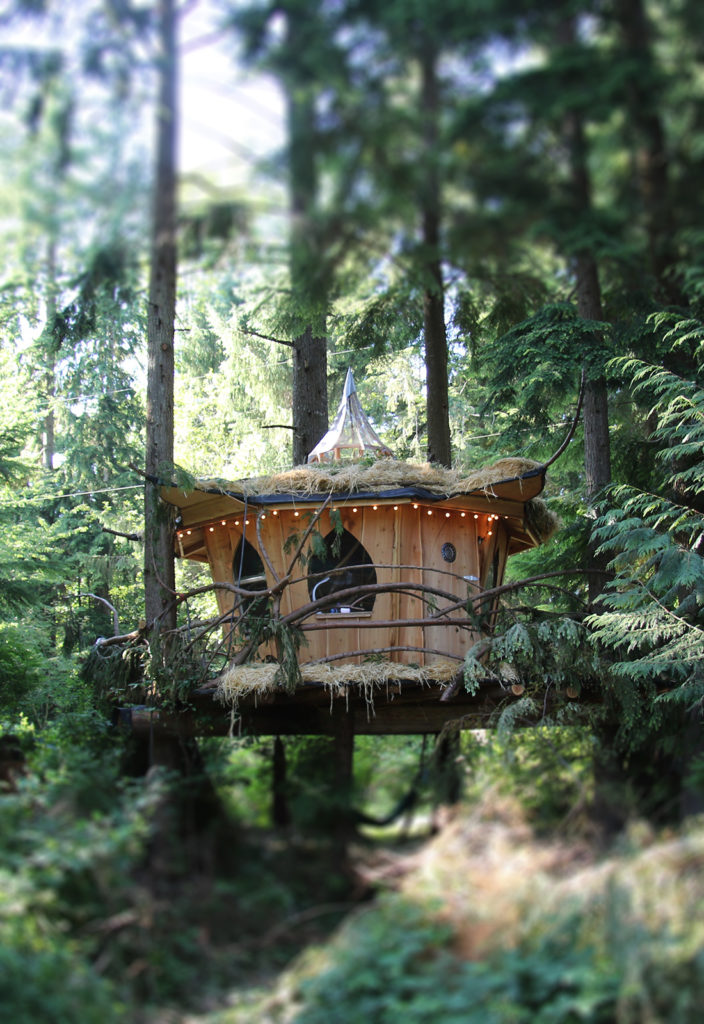 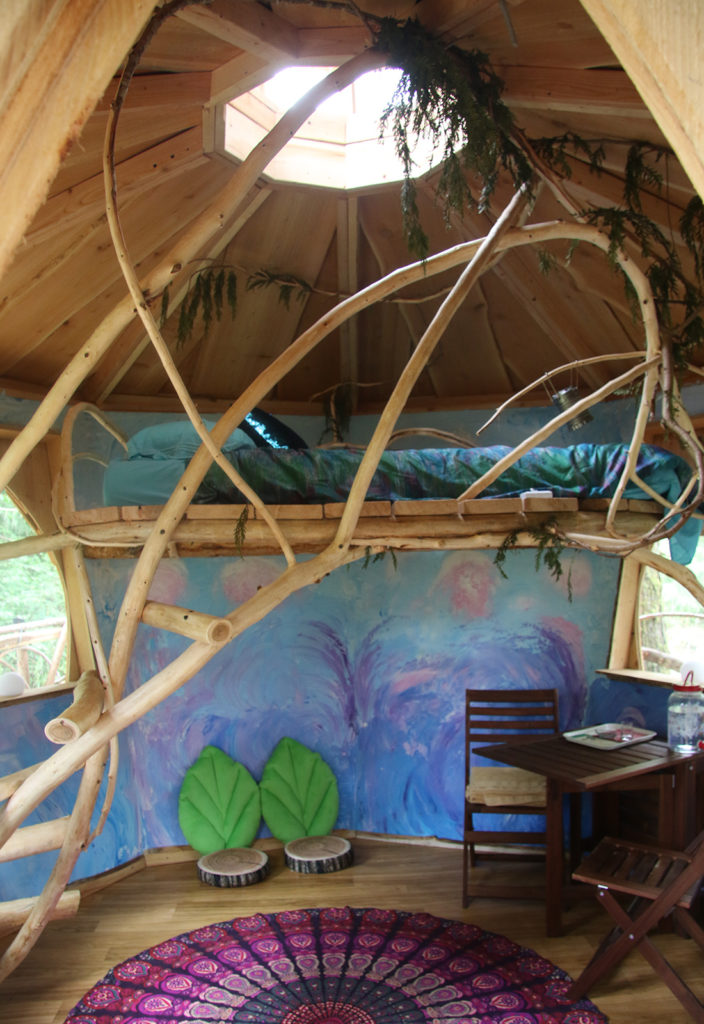 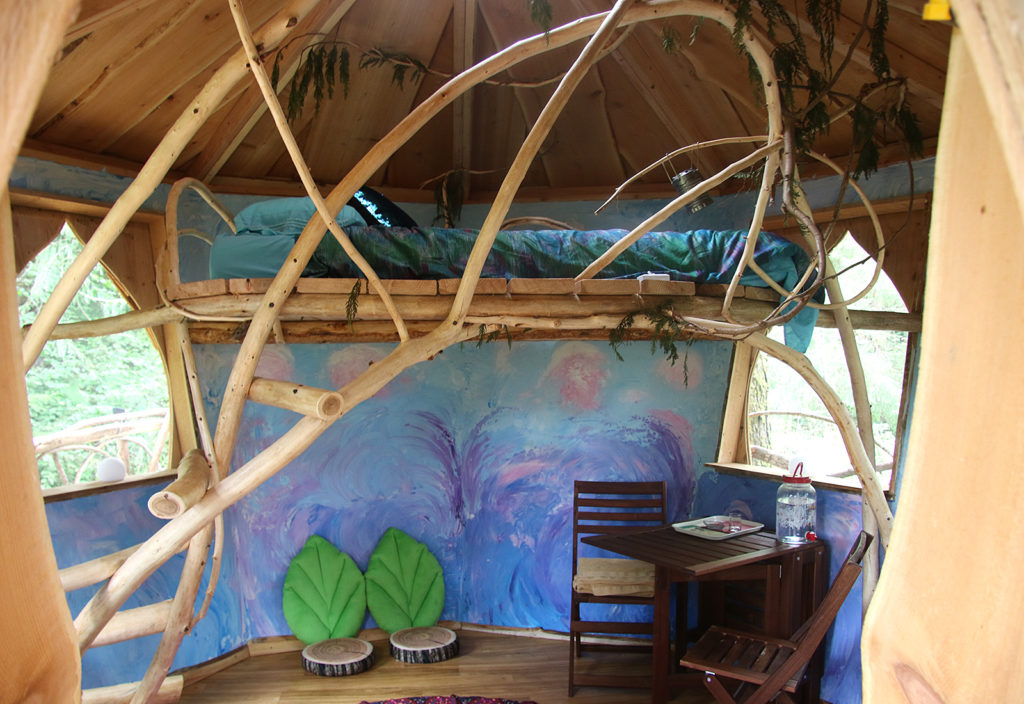 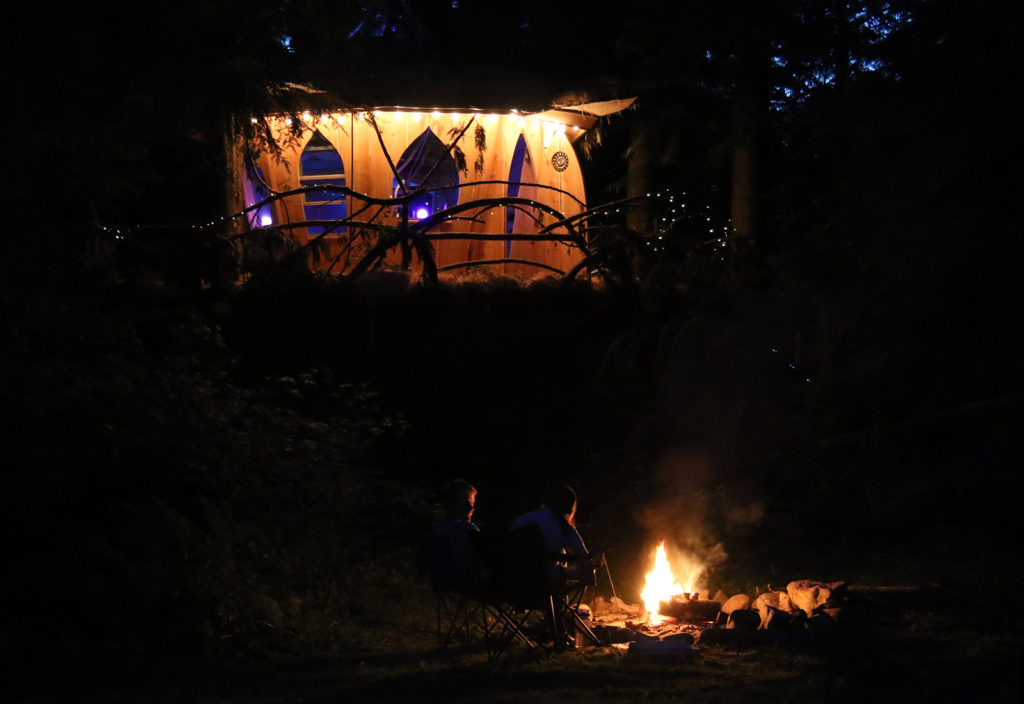 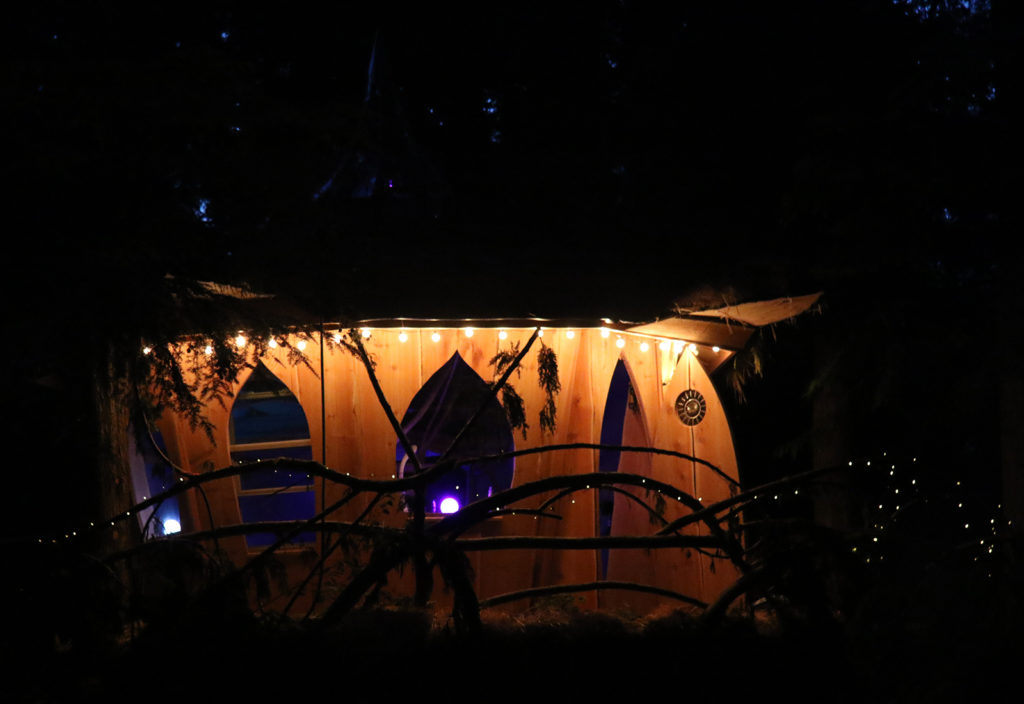 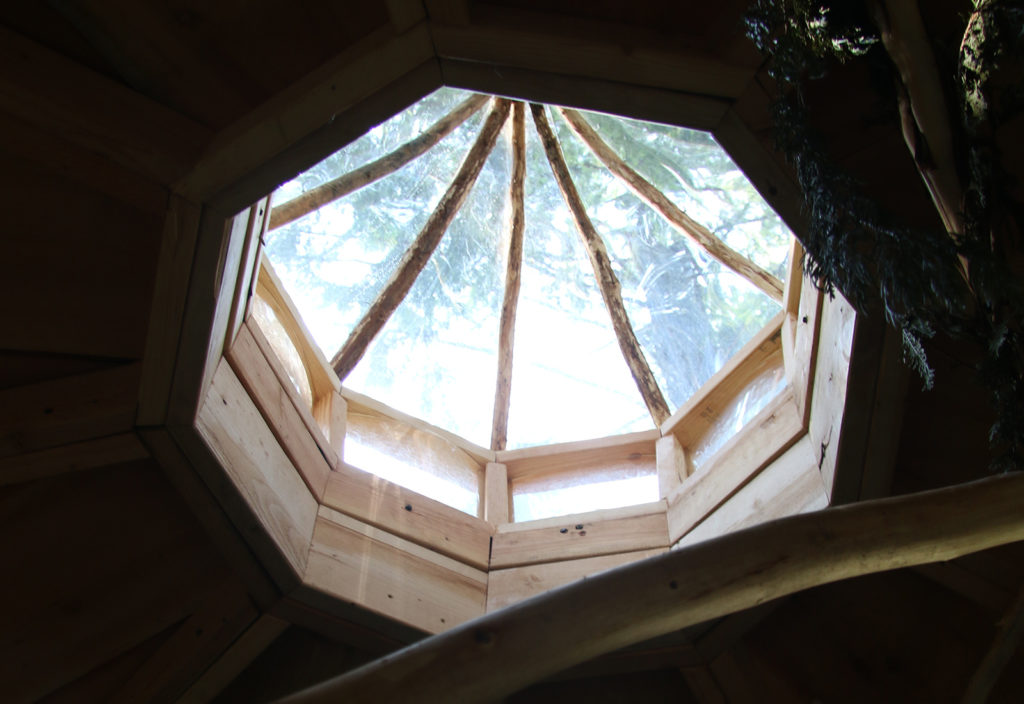 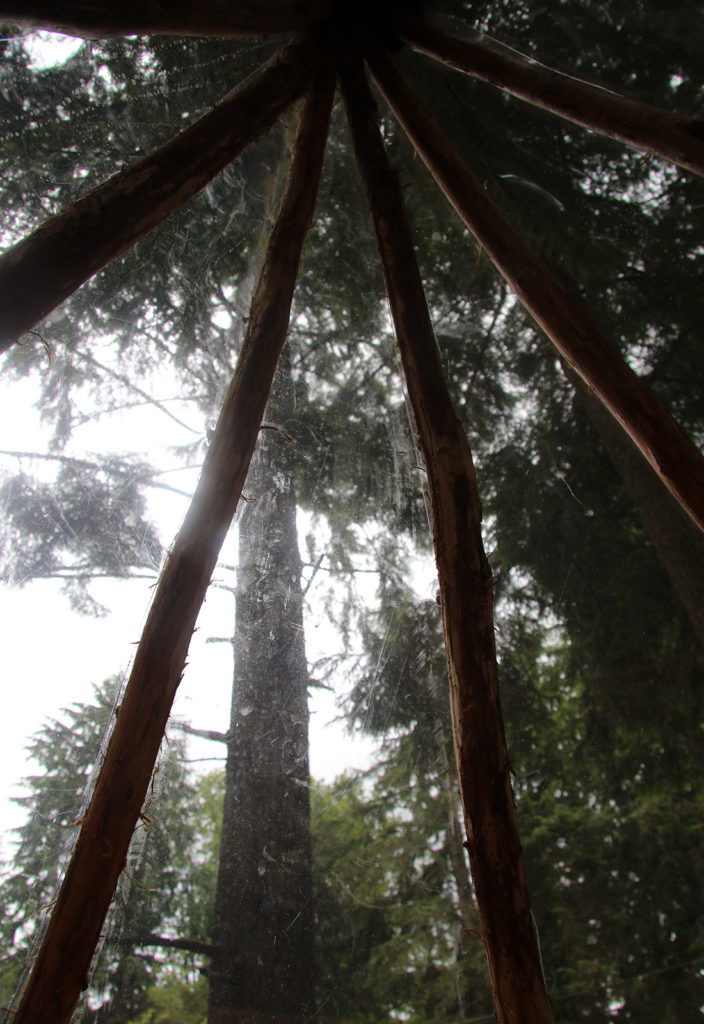 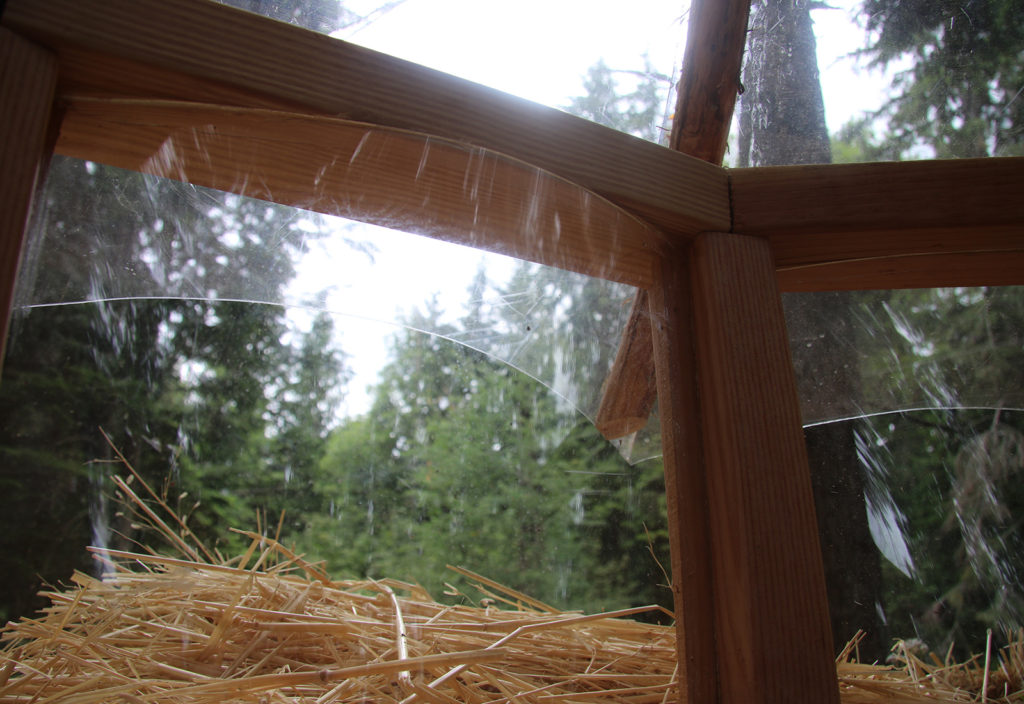 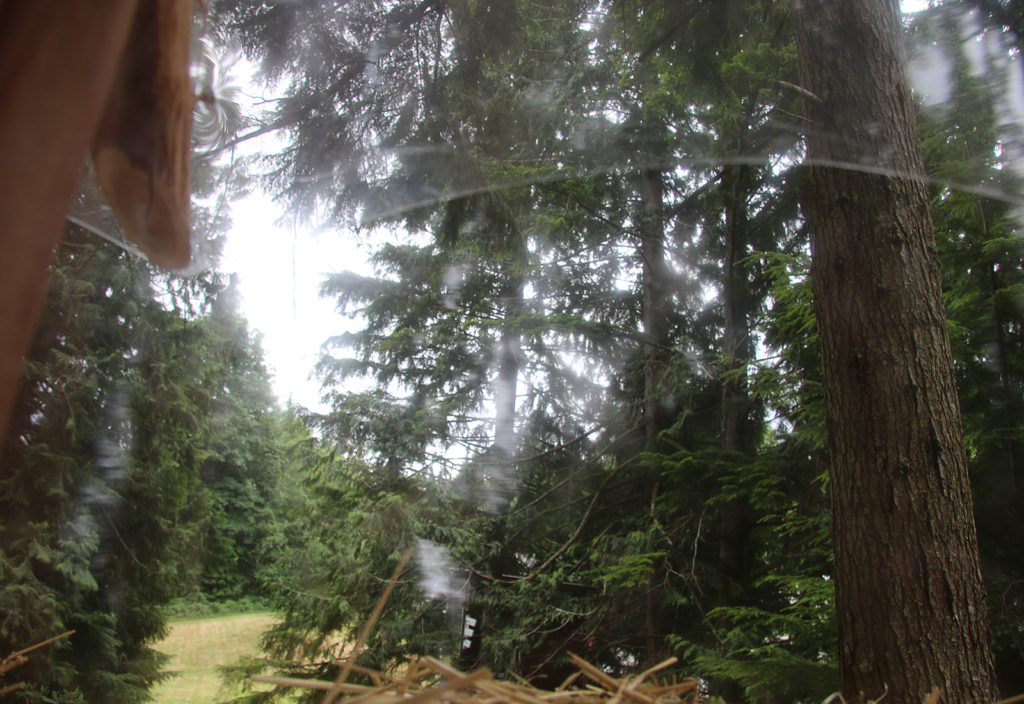 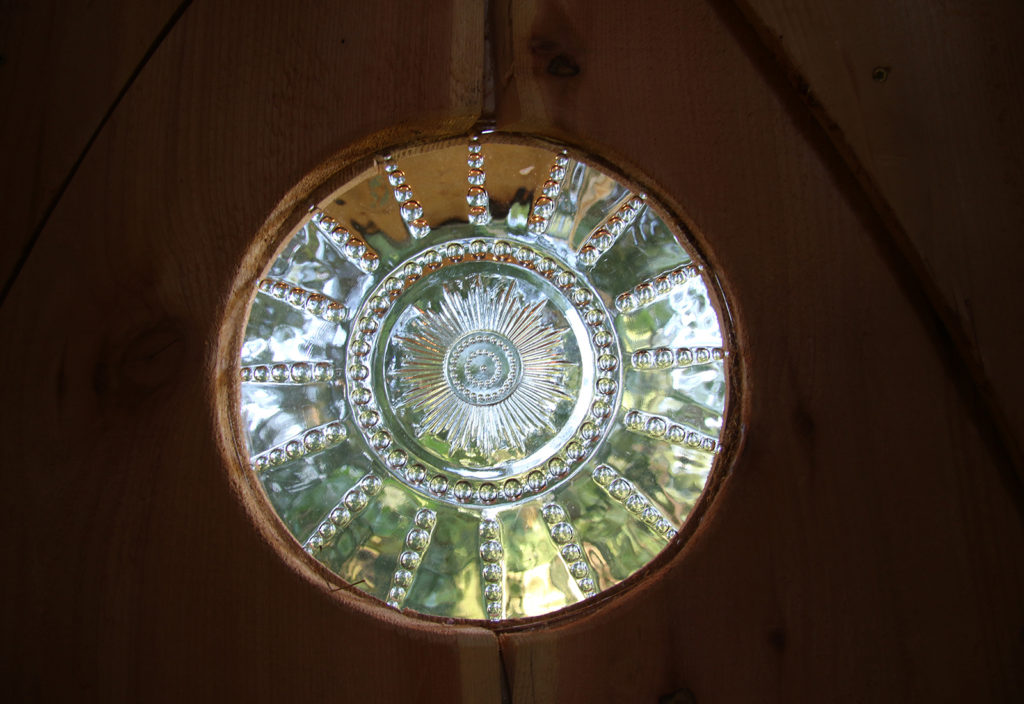 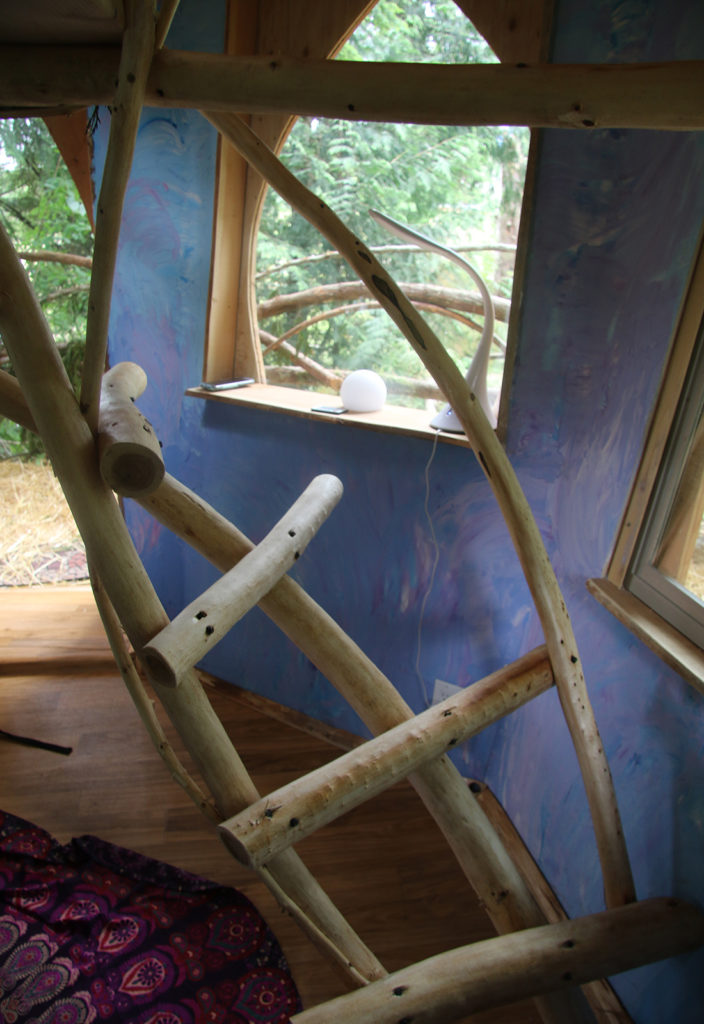 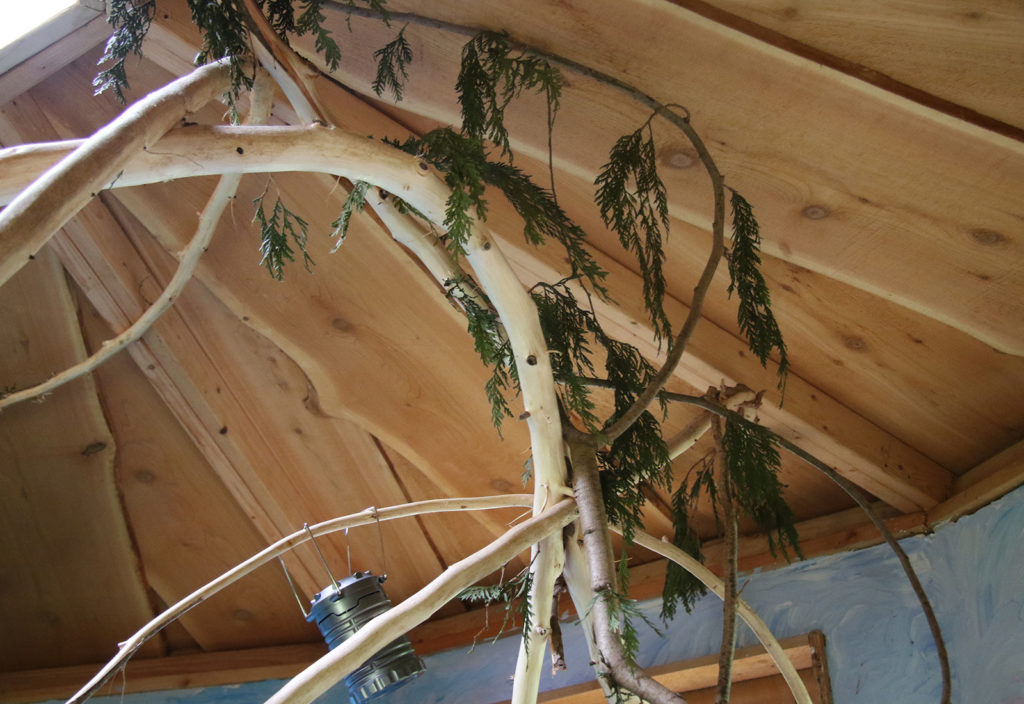 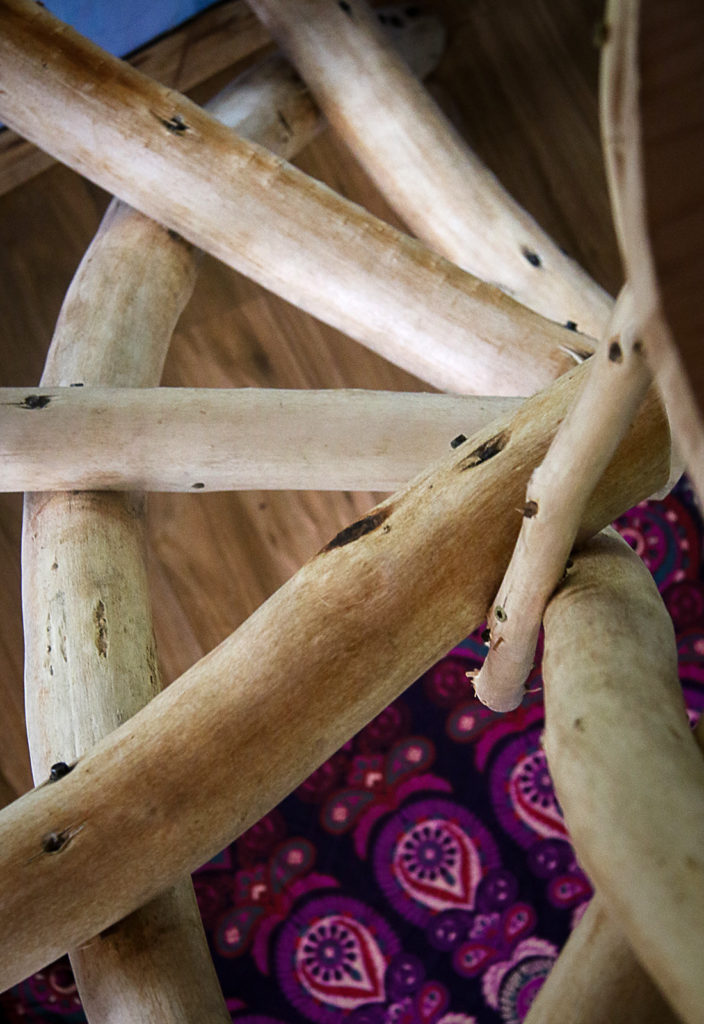 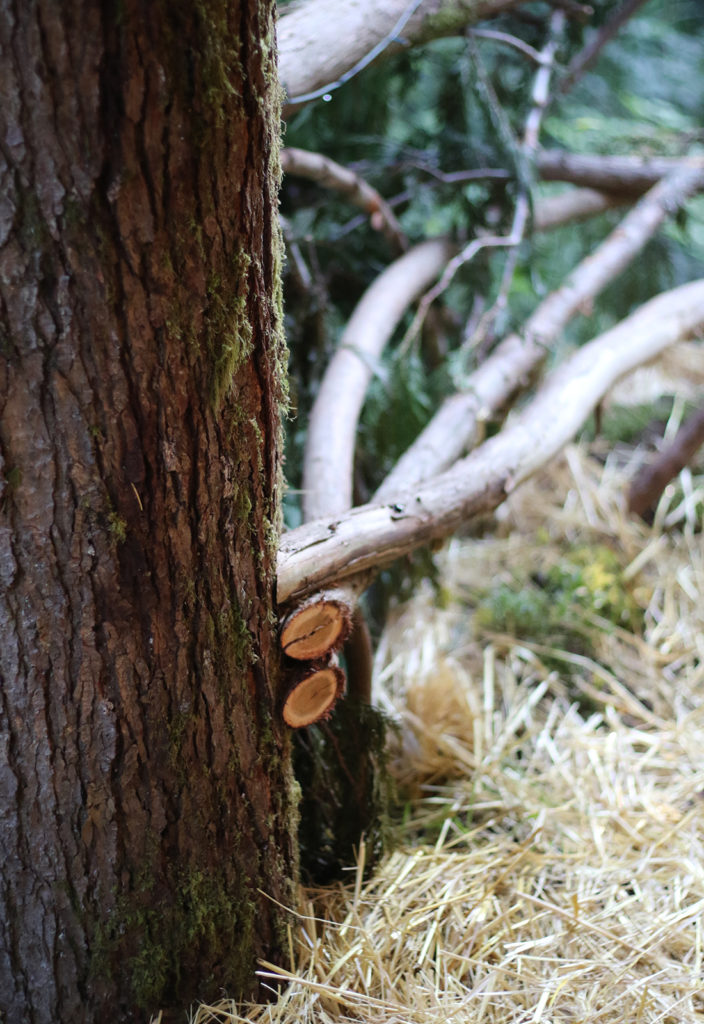 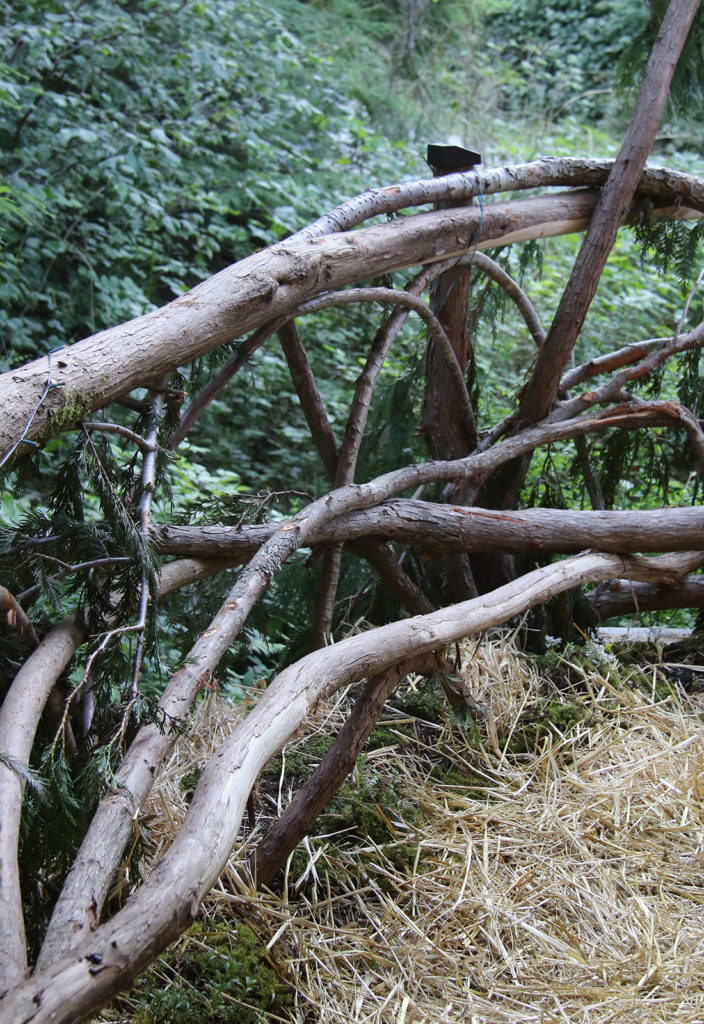 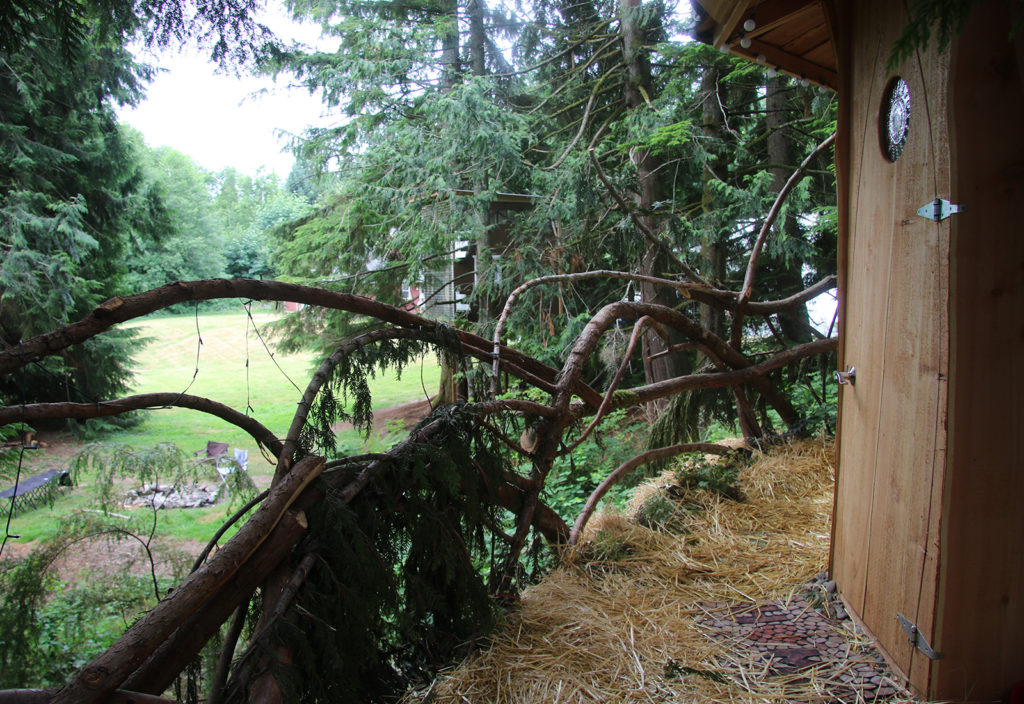 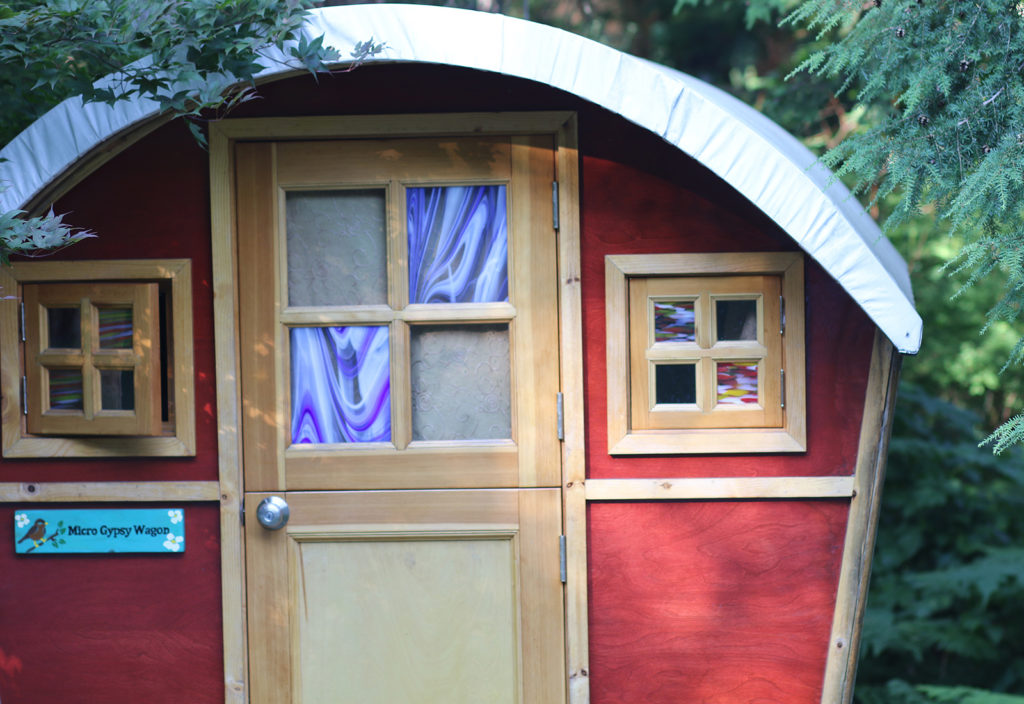 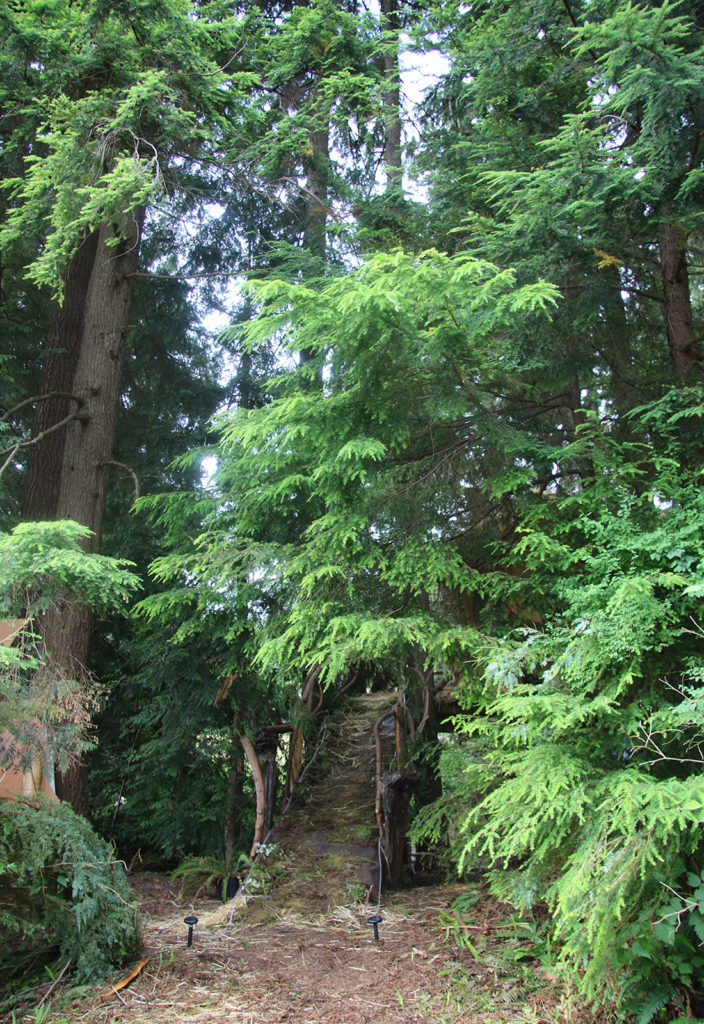 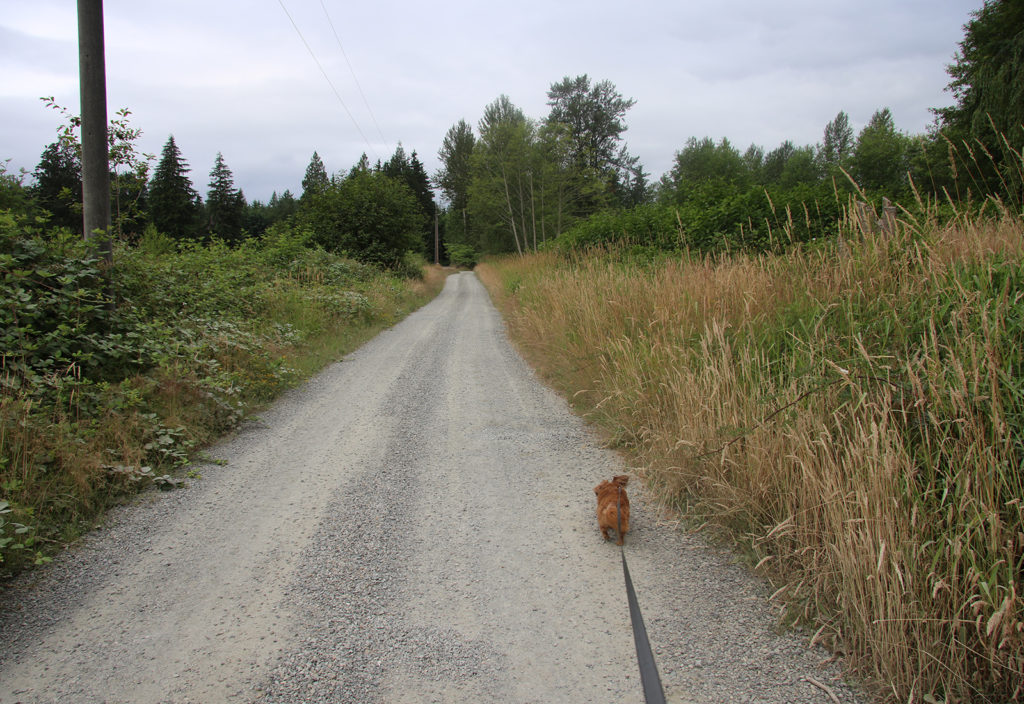 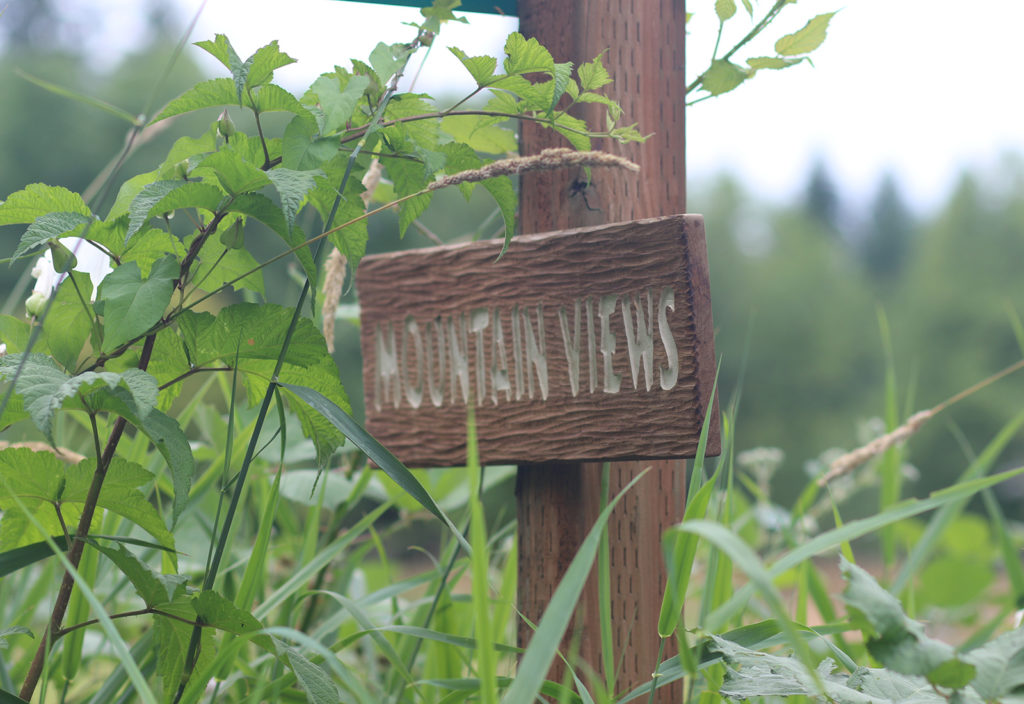 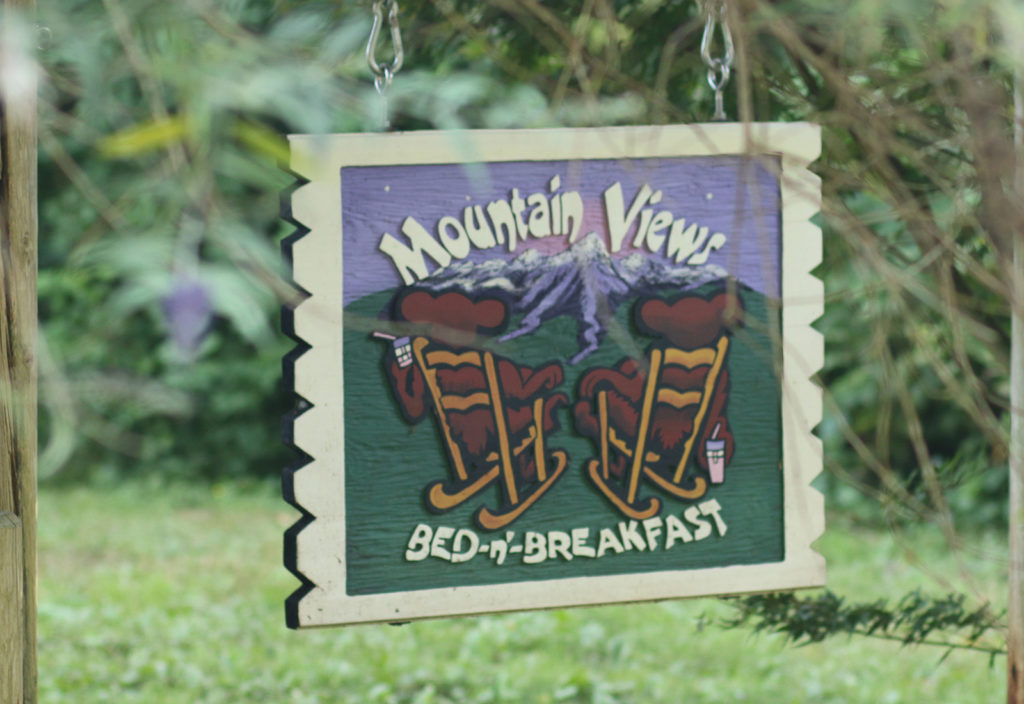 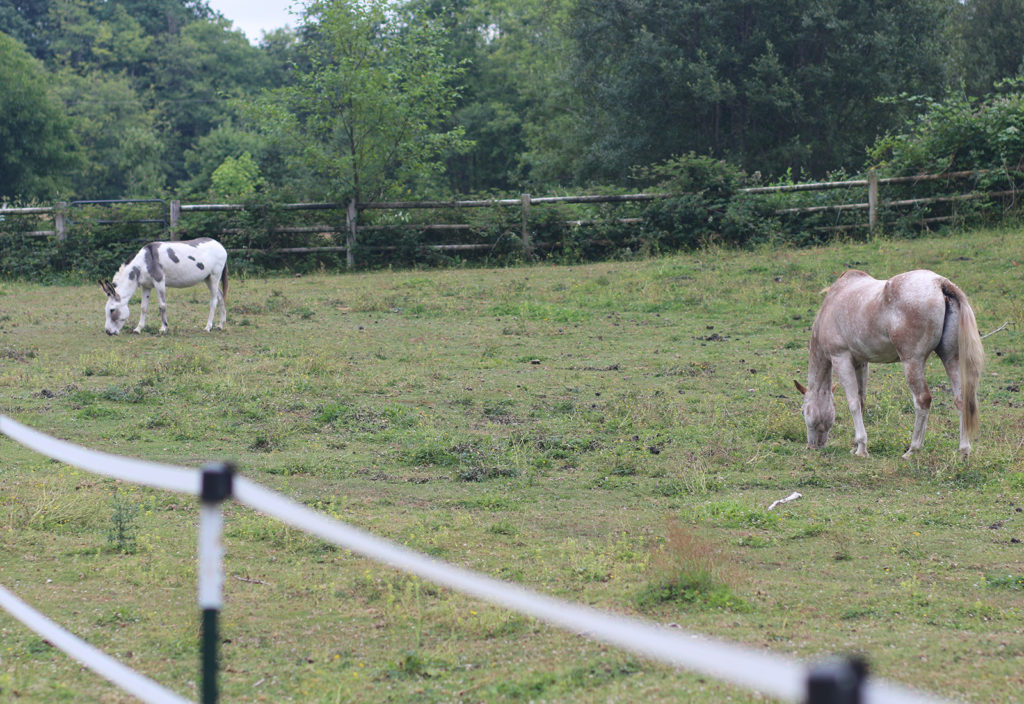 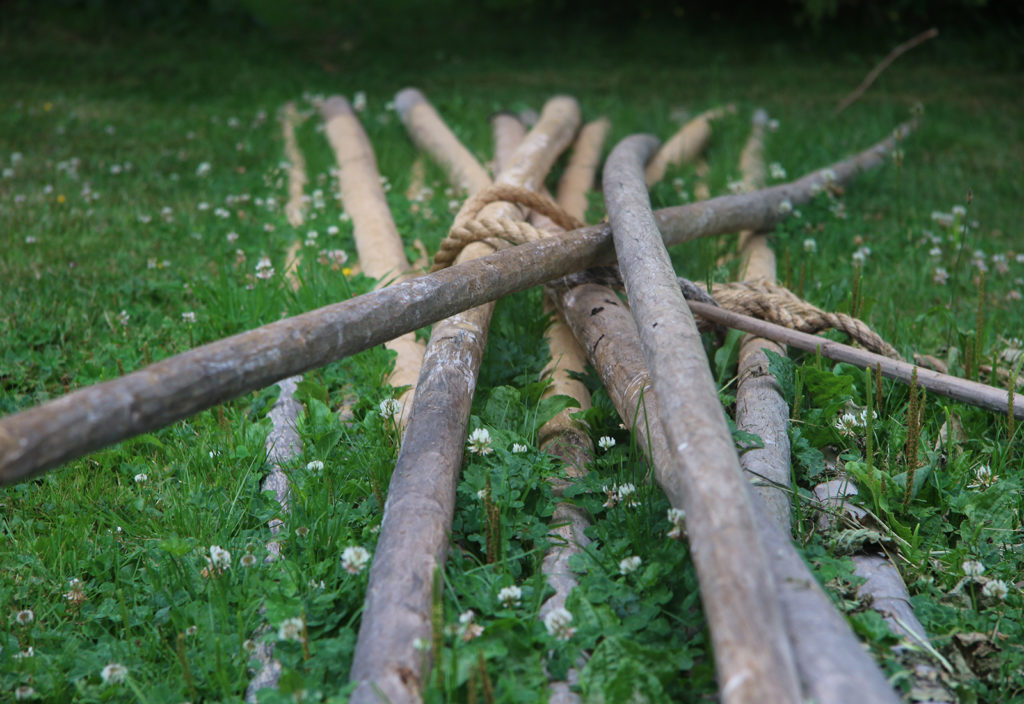 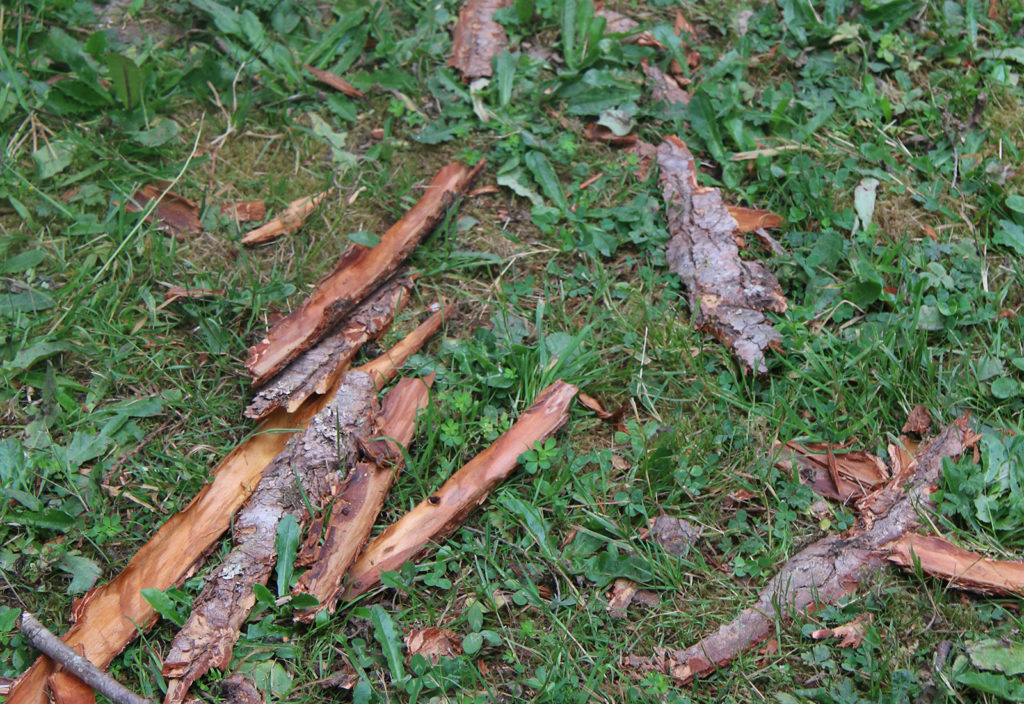 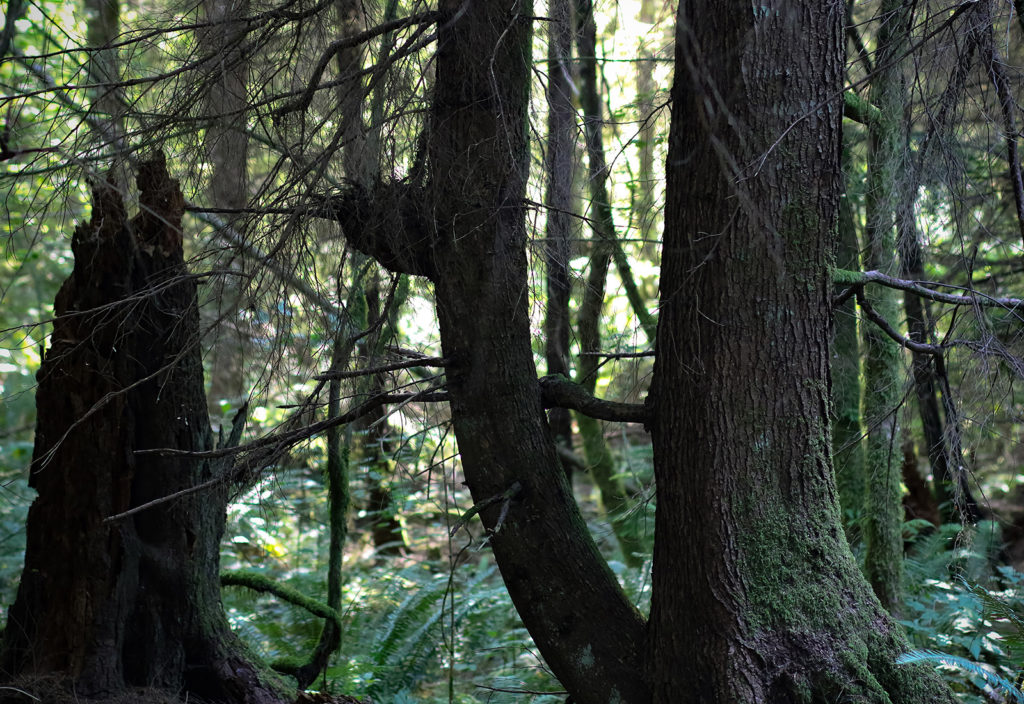 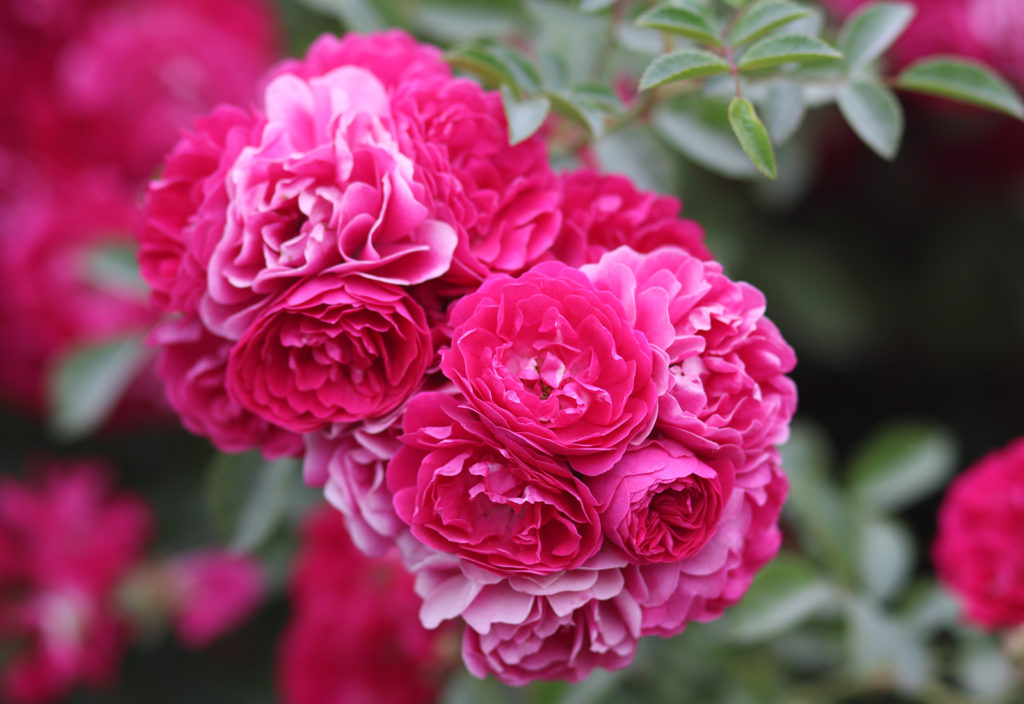 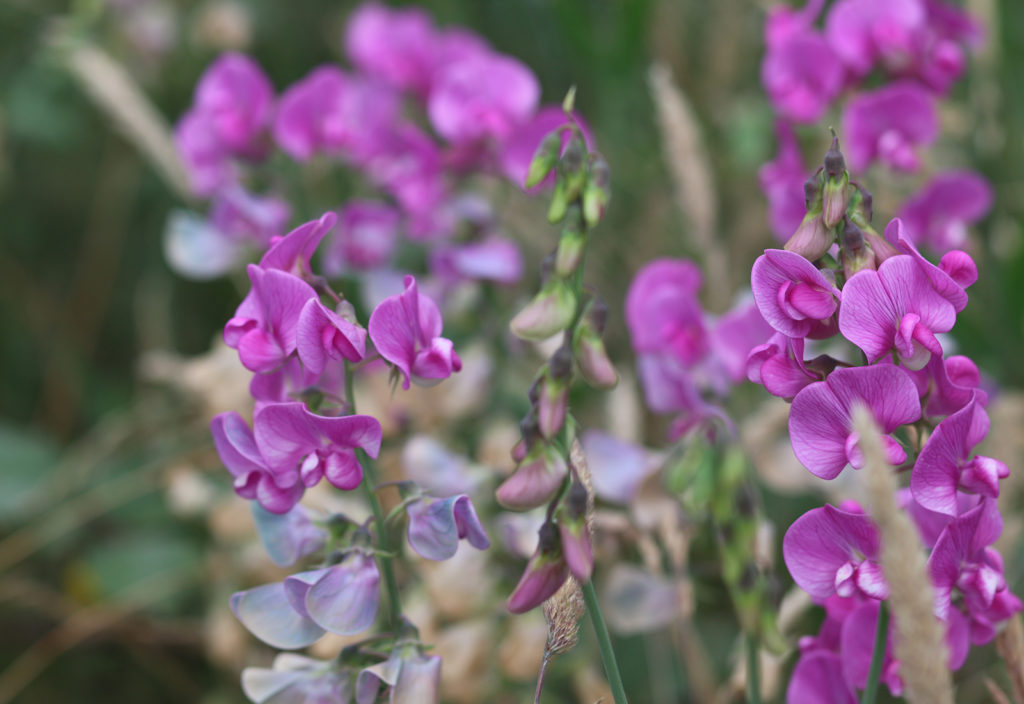 View from the cupola: The Pot Leaf Tree House at Mountain Views Bed and Breakfast, a cannabis friendly “bud and breakfast” near Monroe, Washington. Heather Irwin/PD

Siri isn’t used to looking for magical tree houses, so don’t believe your GPS when it suggests turning left toward an angry looking collection of signs promising to shoot trespassers on sight. You haven’t yet arrived.

Instead, look for a tiny sign, hidden by blackberry bushes, tangled sweet pea vines and wild roses, for Mountain Views Bed and Breakfast—which reveals itself only through careful observation and detailed directions. Down a dusty gravel road, past a surly donkey and an indifferent horse, is a grove of ancient cedar and fir trees. Look carefully and you’ll see a mossy Tolkien-esque hut 10 feet off the ground—a fairyland fantasy waiting to be explored. Prepare to squeal.

Just outside Monroe, Washington, in view of the Northern Cascades is a new kind of overnight destination: A “bud and breakfast” that welcomes cannabis users to spend the night in marijuana-friendly environments. Usually a bit offbeat and a quirky, natch, they’re proliferating in states where recreational marijuana is legal, like Colorado, Oregon and Washington, and California. Though there’s still a bit of secrecy around these 21+ retreats (marijuana is still illegal federally), they’re easy enough to find through outlets like AirBnB.

About 90 minutes from Seattle, included directions to a nearby dispensary where guests get a special discount on everything from edibles to joints and a guided tour of the property’s two “Pot Leaf” and “Hashtag” tree houses, two gypsy caravans and a secret rainforest only accessible to guests. That and a welcome toke before climbing to our private woodland fort.

The draw for 420-adventurers are unique stays on private property—usually in off-the-map outdoor spaces—where the folks from legal states, as well as states where marijuana remains illegal, can relax and partake locally-grown weed without having to hide in the bathroom or sneak behind a dumpster. Like-minded guests are free to congregate and share a fatty if they’re so inclined.

Which is pretty much how our treehouse came into being.

Sketched on a piece of letterhead by artist/natural builder Sun Ray Kelley, the nine-sided Pot Leaf Treehouse is a fantasy dwelling perched in the trees with a living roof, entwined branches that create a twisting ladder to a cozy loft, glass cupola and windows shaped like lotus leaves. Unconstrained by practical matters like building codes, it’s a fantastical adventure straight from Neverland rarely experienced.

As one of the first guests to the treehouse, it is clearly a work-in-progress that will only improve with nature and time. The long gang plank to the treehouse is covered with patchy moss and hay, a steep but short climb to a newly planted catwalk encircling the building Throughout the evening, water drips from the hay-strewn roof that’s recently been planted and watered. Rough-hewn branches from nearby trees have been bent into a makeshift balcony railing, and our host, Tracy shows us some handy branches we can use as a bench for smoking. You know, if we’re into that. Because Sun Ray, she says, was very into that while he was building the space.

With a powerful scent of cedar, the treehouse is so new that the wood is still drying and fronds from the branches are still green. Inside the arched doorway the tiny house has a porthole ceiling and is just big enough for a small seating area and the loft where we’ll sleep. It’s hard not to be giddy about climbing up and down the ladder to what amounts to the coolest night of sleep ever.

After dark, folks gather around the communal fire pit, as twinkle lights around the structures turn on. The night smells like campfire, freshly mown grass, wet earth and the occasional whiff of cannabis. Folks aren’t here to get ripped, clearly, but to enhance an already magical experience.

Falling asleep is easy in the bamboo bed, surrounded by trippy pink and purple walls stuccoed walls inside the forest house. But morning comes early as sun streams into the six uncovered windows around 5:30a.m., as well as the glassed-in cupola above our bed. Stepping onto the balcony in the early hours, it’s tempting to contemplate a wake-and-bake session, but the quiet, foggy morning in our treehouse is drug enough for one day.

Want to go? Know that there is no running water or bathroom in the treehouse, and facilities include an outdoor shower and port-a-potty (which is very clean). There are a handful of electrical outlets in the treehouse, but you probably wouldn’t want to use them for much more than charging a cellphone. The tree houses aren’t appropriate for children, and pets must be pre-approved. There is no access for people with mobility issues (there are two traditional rooms inside the house that would be more accommodating), and climbing into the loft requires a bit of strength in addition to having a weight limit of about 400 pounds. There’s also no breakfast. The Pot Leaf Treehouse is $175 per night, but with taxes and cleaning fees runs closer to $275 on airbnb.com. You can also book directly through Mountain Views Bed & Breakfast. 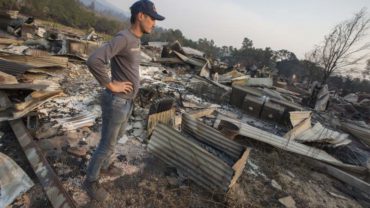