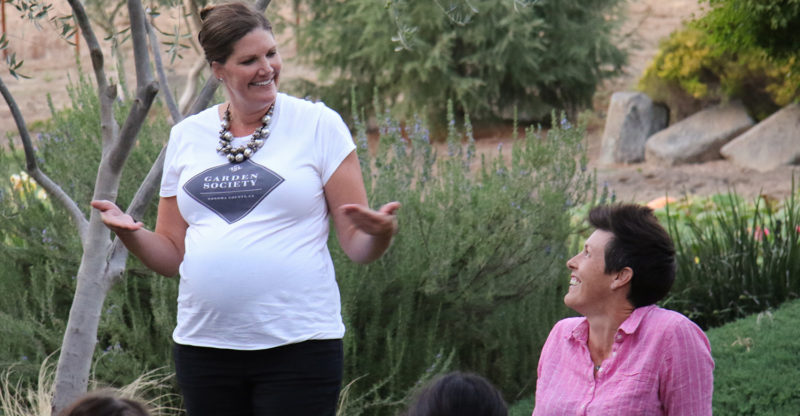 Sitting in front of a locked warehouse, Siri has led me a mile down a lonely dirt road that’s got more holes than a wheel of Swiss cheese. We’ve already blown past several angry looking No Trespassing signs and a squirrel clearly irritated by the intrusion.

Pulling up to a rusty building surrounded by dangerous-looking farm implements Siri chirps: “You have arrived at your destination!” I’ve already established that it’s doubtful we’re at the cannabis-focused garden party I’m looking for. No sane woman is climbing over a broken tiller in heels and a sundress. Even for marijuana-infused chocolate.

Seeking out an invite-only gathering hosted by Garden Society CEO Erin Gore takes a bit of perseverance for a first-timer. Held at a private home (Siri finally found it after some backtracking) the cannabis-focused gal-gathering is somewhere between a Tupperware party and a speakeasy–a convivial show and tell with a wink-wink covertness.

Aimed at women who are seeking relief from both everyday stresses and deeper discomfort associated with chronic pain and aging, Gore’s Santa Rosa-based marijuana edibles company uses social gatherings like this to both inform and engage a growing audience of cannabis users.

According to a recent study by Eaze.com, women are one of the fastest growing demographics of cannabis users, including large numbers of parents and seniors. “The data shows women are turning to cannabis to reduce or replace their consumption of alcohol, prescription opiates, and antidepressants,” said the study.

“Women are looking for an alternative to pharmaceuticals,” said Gore, who first used cannabis to manage pain after several hip surgeries. She was reintroduced after years of international travel and jet lag left her feeling exhausted and sick, but found that many of the high-THC products in dispensaries were too strong. Instead, she threw parties for girlfriends where they baked homemade cannabis edibles.

Garden Society gelees are infused with a microdose of cannabis.

From sleeplessness and anxiety to arthritis and back pain, Garden Society’s low-dose organic confections are aimed at functional relief rather than epic inebriation. Their Bliss Blossoms are handmade organic chocolates infused with cannabis oil containing 10 mg of THC per piece and are recommended for relaxation. Bright Blooms are organic fruit and herb gelees that contain 5mg of THC per piece that utilize a more uplifting cannabis strain.

As mothers, grandmothers, and caregivers, however, many of the women at the event say they’re looking for some trustworthy information about the potential benefits.

“We are connecting with women at an intimate level, with small parties where they can ask questions,” said Gore. “By starting conversations, women can ask questions and it makes them feel more confident. They want a place that’s safe
because all of us have something we’re trying to manage.”

Wandering among the 40-plus guests, guests are reticent to give too much personal info but eager to talk about why they’re interested in Gore’s products. Not all guests imbibed in the product, and many were just canna-curious.

“I don’t use regularly,” said Leslie, a guest at the party who preferred not to use her last name. ”My friend brought me, and I’m curious. I think it could be an option for me when it’s legal (for adult use),” she said. Recreational marijuana use begins in California on Jan. 1, 2018.

“We all have kids,” she said, nodding to other women standing nearby. “Sleeping is an issue. We all have stress, but want to try something natural,” she added, echoing a common concern of party-goers who didn’t want to smoke or inhale cannabis.

“I was never into pot,” said Cindy, who also asked not to use her last name. “But marijuana has so many medicinal properties. I’m open to the alternatives,” she said. “I like the idea of such beautiful packaging, or the low dosing for relaxation and insomnia,” she said.

As the evening progresses, Gore addresses the rapt audience as they sip chardonnay.

“There are some really bold statements about cannabis right now because it’s not regulated (yet). So you really want to educate yourself,” she says. “In dispensaries, you may find a lot of higher dosage products, but our edibles are designed for a new or casual user — a low dose consumer,” she said. “It’s not the cookie you eat and stay high for three days.”

While there is no smoking, vaping or tell-tale pot haze at the Garden Society event, women in attendance admit that marijuana still carries a stigma that’s very real. Still categorized as a Schedule 1 drug – likening it to cocaine and LSD – cannabis remains in a societal grey zone even though medical marijuana has been legal in California since 1992.

And though some attendees have experience with cannabis (and medical cards), others are still new to it, curious about how it will affect them.

“When you put it in context of wine, people understand it,” she said. She correlates 5mg of THC (the psychoactive compound in marijuana and the amount in her lowest-dose product) to approximately the effect of about two glasses of wine for new users, adding the caveat that the effect can be significantly different depending on body chemistry, weight and other factors. Gore advises going slow and low to be safe. One of the biggest mistakes new users often make with edibles is not waiting the 1-2 hours for the full effect, eating too much and regretting it later, she said. “You can always have more,” she told the audience.

Products in local dispensaries can range from 5mg to a whopping 500mg.

As guests leave, those who’ve shown medical marijuana patient recommendations are offered a small sample of the confections. Others mill around talking to Gore’s brand ambassador, Amanda, about how to get a recommendation or ordering Garden Society Products.

We’re all trying to manage triggers,” she says. “This is about finding peace. This is just another tool in our arsenal for the best life we can live,” says Gore. “Who needs this more than women?” 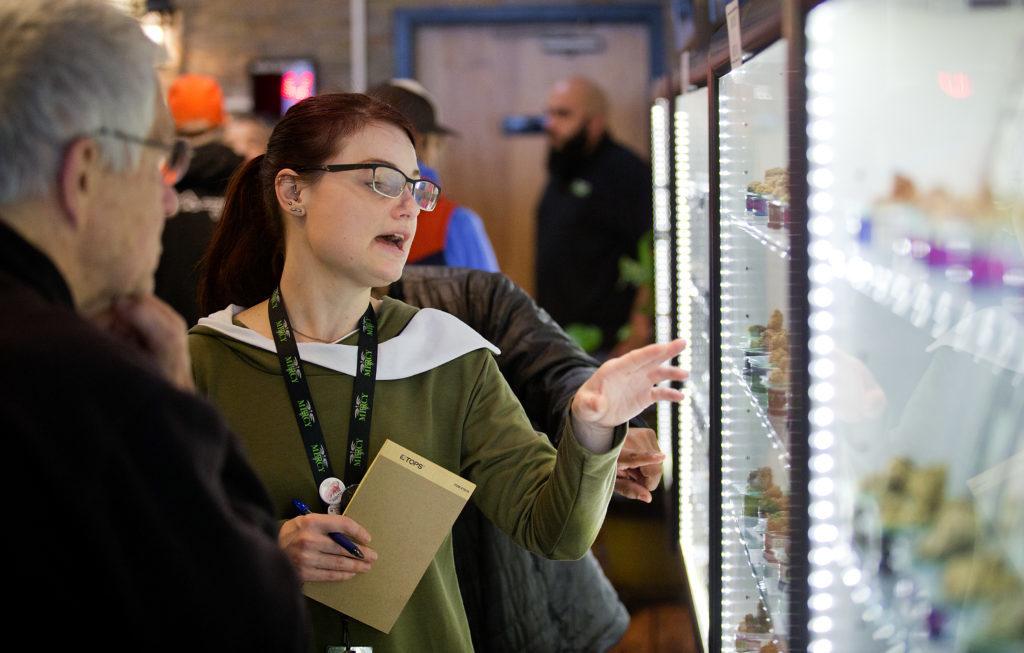 From recreation to medicine, more seniors turning to cannabis in Sonoma County 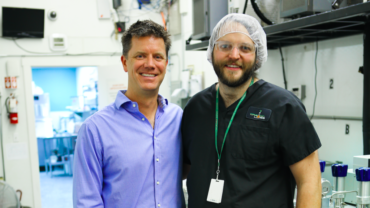