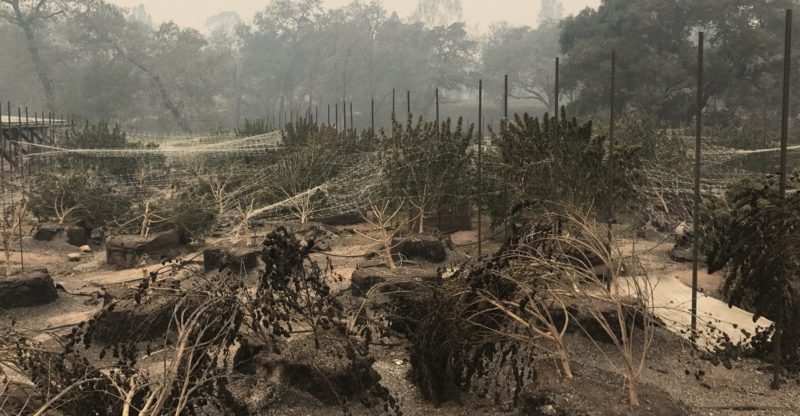 (Above photo from Erich Pearson, SPARC)
Wildfires ripping through Sonoma, Napa and Mendocino County have destroyed at least seven cannabis farms, according to reports. Grower industry insiders say that numbers will likely go much higher, and even if farms aren’t decimated, toxic smoke and ash may require farmers to destroy crops.

It’s been a rough year throughout the North Coast cannabis community as legalization led to plummeting flower prices for growers, onerous and costly permitting and ongoing confusion about the path to legal growing.

With harvest in full swing, fires couldn’t have come at a worse time.

Stories are still developing, but here is what we know…

Blue cookie covered in a bit of ash. My heart goes out to everyone effected by these fires. They were pretty close to our farm at times and we aren’t out of the woods yet. If we can help anyone effected by the fires please reach out to us.

– There are still no solid numbers for the number of farms lost, but according to Leafly, there are between 3,000 to 7,000 marijuana farms in Sonoma County. In Mendocino it’s estimated that there are 7,000 to 10,000 farms. So far there are no solid estimates on how many farms are destroyed or how many crops have been damaged, but Hezekiah Allen told reporters, “If you’re just talking piles of ashes, I think we may be looking at 30 or 40 farms” destroyed, Allen said. “But the broader regional impact will have thousands of farms seeing reduced values, with some having to destroy their crop. Any airborne contamination is going to stick to those buds. And there’s a lot of toxins in that smoke.”

Marijuana farmers are not eligible for crop insurance, emergency relief funds or most loans. Here’s how to help.

– MendoFire: CalGrowers Wildlife Relief Fund has been established to assist growers in need and has so far received more than $7,000 in donations.

– SPARC CEO Erich Pearson was at the heart of the Sonoma Valley firestorm on Monday morning, losing much of his Glen Ellen cannabis farm.

There are no words right now to describe the loss, the heart break and the trauma that our beloved home and community is going through. We are trying to save what we can, and will be absent from social media for the time. You are all in our thoughts and our prayers! ? #sonomacounty #sonomacannabis #fires #sonomacountyfire #sonomagrown #cannabiscommunity #sonoma #napa #staysafe

We share a farm with Bee Well Farms. Austin and I returned after the fires passed to find all the animals safe. These two were in shock when we found them but are up and at it now. Just trying to keep them from eating the cannabis@now that their fences are gone.

– CannaCraft has donated $50,000 of product to local dispensaries for those displaced. Reps think it will last 3-4 weeks. The Santa Rosa business office has donated 12,000 square feet of space to the Red Cross’ Northern California command center.

As of today, the American Red Cross logistics team set up their headquarters at CannaCraft’s Santa Rosa facility. Please note that this is solely an administrative area. Check out the link in our bio for information on where to find resources, shelters, and how you can help. #SantaRosaStrong

– TSO Sonoma along with Valhalla, Kiskanu, Sava and Kikoko will hold a benefit “Elevated Happy Hour” in Healdsburg on Oct. 20 from 5:30-7:30pm. DM@tso.sonoma on Instagram for details.

There are no words right now to describe the loss, the heart break and the trauma that our beloved home and community is going through. We are trying to save what we can, and will be absent from social media for the time. You are all in our thoughts and our prayers! ? #sonomacounty #sonomacannabis #fires #sonomacountyfire #sonomagrown #cannabiscommunity #sonoma #napa #staysafe

-““The October 2017 firestorm is having an extremely severe impact on our communities,” Allen said. “It is the worst year on record, and the worst year I can remember, in terms of farms lost. We have been able to confirm seven farms lost, but we expect the number to be much higher as more information comes in,” said Allen to the LA Times. 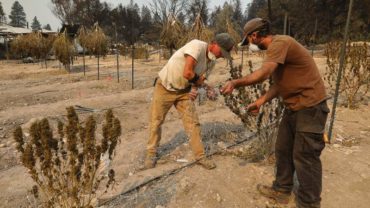